Well I can’t quite believe it’s been over a month since I last blogged on here! Time really is flying by and I think we’ve still not seen the best of the summer fishing season yet. This weekend was the 4th annual Oxwich Bay Kayak Fishing event held on the Gower Peninsula in Wales. It’s an event at the top of any serious kayak anglers calendar and one I know many have been looking forward to since the Ocean Kayak Classic last month. On the build up to this event we spent some time here at Bluezone preparing rigs and tackle for the day and having not fished the venue before some research and local knowledge was sought to get an idea of the types of fish found in the bay. This was also going to be a great opportunity to try out some of the new gear we’ve had in recently, all in the name of work of course!

Car fully loaded I set off late Friday morning with the intention of getting out on the water that afternoon to scope the ground for the following mornings species hunt. The M4 traffic soon put that idea to rest as I spent the better part of 6 hours battling my way up to Gower! Not the start I had hoped for as I rolled into the Oxwich Bay car park at dusk. I decided against a late launch and headed for a great looking pub I’d passed on the way in for a wind down and a bit of food before hitting the sack for an early night.

The big day arrived and the conditions luckily weren’t too bad at all. We had bright sunshine that was interrupted by the odd shower and the bay itself was fairly sheltered from the worse of the wind so I’d say we got fairly lucky that the boundaries weren’t brought in closer, giving us all more room to play in. 129 anglers registered on the day and the rules for this event were the same as the Plymouth event, most species wins and in the event of a tie the first one back takes it – simple, catch lots of fish really quickly…what’s hard about that!? 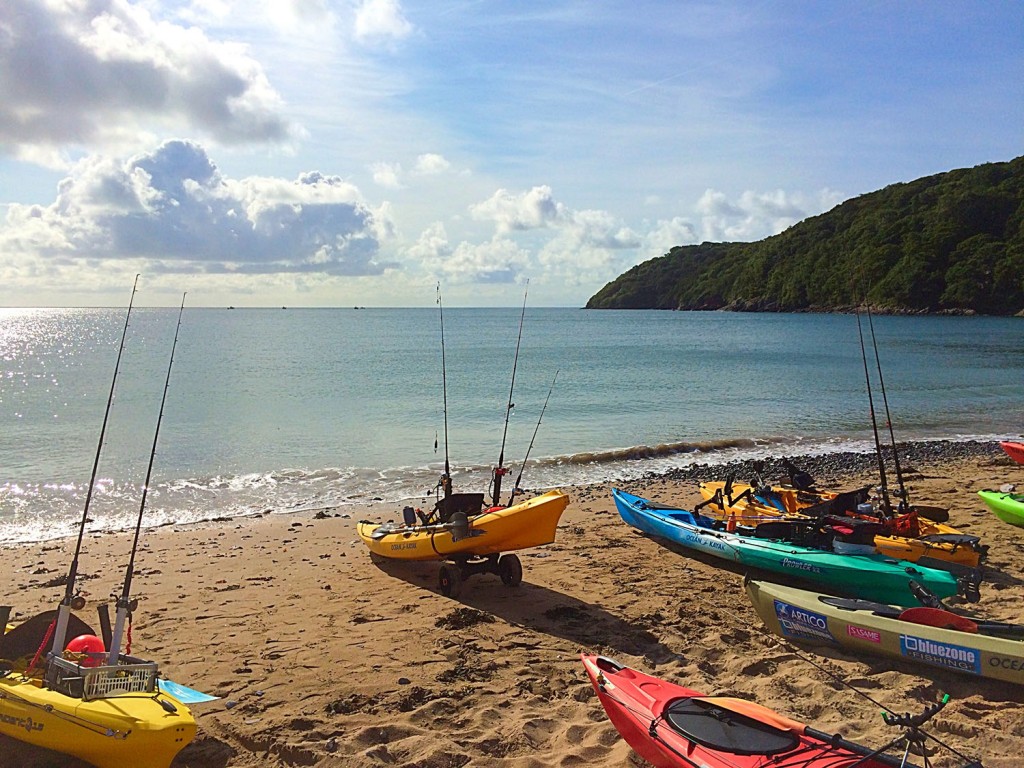 09:30 and we’re all lined up on the beach ready to launch. It was here I got to meet fellow Plymouth anglers Frankie and Lee who were equally as excited as me and were keen to bag themselves some new species that the bay had to offer. The sound of the waves hitting the shore seemed to drown out most of the safety brief though I think most anglers were by now pretty keen to get out on the water. No sooner had he wished us good luck than a barrage of kayaks hit the water and really went for it off to their chosen marks. The bay itself has plenty of features to go at, from rough broken ground, sand banks, channels and even a Wreck it was the perfect venue for a species hunt.

I began by fishing some short drifts with a scratch rig over the broken ground to the right of the bay. This was the general direction most people headed and it all looked a bit cramped in some places! I do like a bit of space when I’m on the water so drifted away from the crowds where I was soon joined by Frankie as we tried to try winkle out some minis to get going. 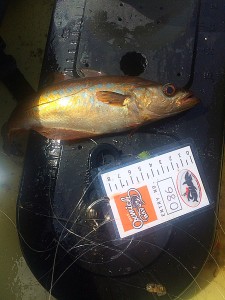 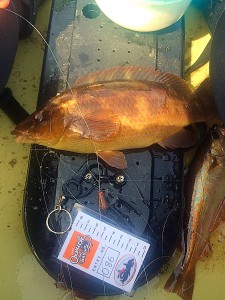 Not having much luck I headed out deeper and dropped anchor in some faster current that I felt offered a good chance of Pollock, Wrasse and Bass. First fish was this nice little Ballan and while I was trying to take his picture the other rod baited with Isome was engulfed by a greedy little Pollock. Two species on board at once, sound efficient though in reality it caused a massive tangle with two fish flapping about and me trying frantically to photograph them, but still we were off the mark!

Things went a bit quiet so down went a Sabiki rig. Sasame provide a very wide range of these and I have been playing around with the different patterns over different ground. This was the first time I’d used the S-851 Micro Shrimp imitations and I used a 5g Shout Dangan Jig to get it down. These jigs flutter on descent and will take pretty much any fish going so to me this rig was a winner! In quick succession I had three more species on board, a Smelt, a Corkwing Wrasse and a Mackerel, though unfortunately the Mackerel didn’t count in this event. 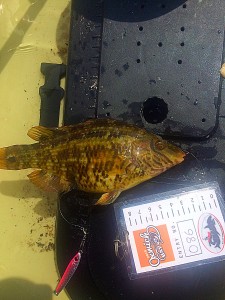 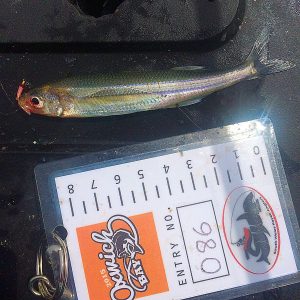 Now with 4 species it was time for a move and I was keen to try the cleaner ground for a Smoothound. This is a species I’d not caught before and I knew it was a very good venue in which to try my luck. Down went a big crab bait while I continued with the scratch rig in the hope of picking up some more elusive mini species. Not more than 5 minutes had passed when the crab was picked up by what I was convinced was a hound, right up until I parted the net to reveal a Dogfish! 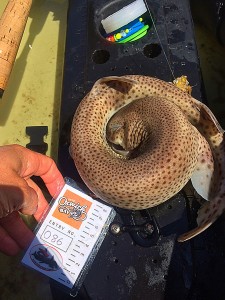 Slight disappointment though it was still another species and one I needed so I whipped on another couple of crab and lowered it back down in the hope that one would find it. I was now against the clock so decided it wasn’t to be, it was now 13:30 and I knew it was time to fish the drift and target the flatfish and Gurnard. I was looking forward to this the most as a Gurnard was a fish I’d not had before, it was also the perfect situation to test the new Bluezone Telepower 300 as this was exactly the kind of fishing it was designed for. The rod itself was designed by Bluezone and built by Artico and is Telescopic out to 3m with a grommet that allows you to fish it short and long. The extra length and plug in nylon tip gives insane sensitivity and a lovely fish playing curve. I Fished it at full length with a baitrunner loaded with braid coupled with a two down rig baited with Lug and Squid. The bait soon found a Tub Gurnard, these have got to be one of the prettiest fish in UK waters and really do look cool with the neon blue running through the plus size Pectoral fins! 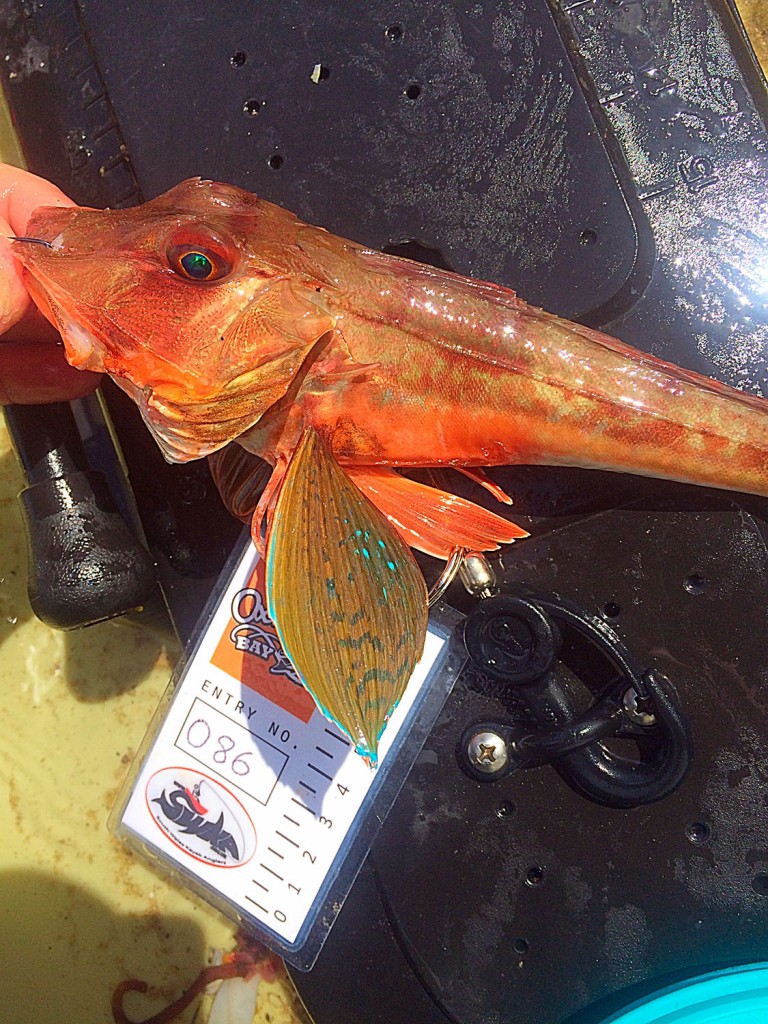 I quickly rebaited and lowered it back down. The drift was very quick and I was covering a lot of ground so was now fairly confident I’d find something else. Literally next drop was a repeat of the first and after a fairly decent scrap species number 7 was on the boat, this time a lovely little Grey Gurnard. 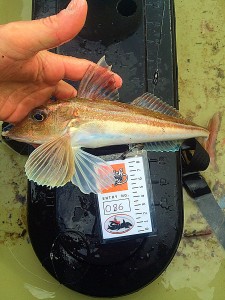 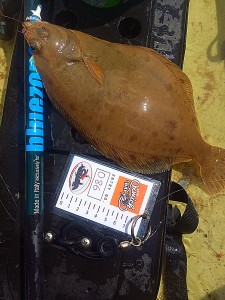 I was now the only kayak right out on the left of the bay so paddled hard to set up for another drift over roughly the same ground. I then hooked and lost a fish before lowering it straight back to nail a nice Dab making up my 8th species, excluding the discounted Mackerel. After two more blank drifts I knew realistically I still needed a few more species and that my best bet would be the Wreck for a Pout, Poor Cod and Bream.

It was now crunch time, 8 wasn’t going to be enough to place but it had just passed 15:00 and I was a good 20 minute paddle away from the beach. Looking ahead it was also low tide so add another 10 minute traipse up to the registration tent! Had I not been in a match I would of carried on the drift fishing, it really was good sport though I headed in quite content with my debut session at a new venue. What ever happened I’d had a cracking day on the water catching two new species on a new rod to boot! In the registration queue I could see some familiar names up there in the double figures, with 14 at the top!

That really is an impressive tally of fish and hats off to the guys who placed. Just behind me in the queue was David Morris of Anglers Afloat who managed a red Mullet among his catch to give him 9 species to finish in 10th. I’d not placed but did manage 15th so not too bad for a days work and a thoroughly enjoyed day on the water. I have to give credit to the organisers of this event, the work that went in meant things on the day ran very smoothly indeed and I will be back next year for sure!