In the last blog I introduced Sasame’s new Junglegym range and talked about some recent test sessions with the new gear on the local canal. Among the catches was a rather memorable Pike of around 15lb caught in the dark on a lure. This got me thinking again about just how active these predators become once the sun sets and are we missing a trick by packing up and going home just as the fish are switching on? Now I don’t proclaim to be a strict Pike angler and only really fish for them now and again but up until then I’d never really had much success with them once the sun had set. Lots of thoughts go around my head and I question do all predators instinctively use the cover of darkness to ambush their prey? I know from my Bass fishing experience that this top salt water predator is highly active in the dark and without question fishing at night for them can be highly productive. 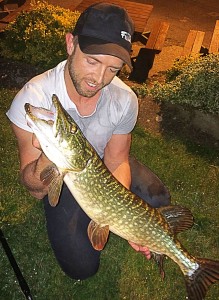 Now I said last week that it was time to switch species and start targeting the Bass and despite managing to hook and subsequently lose a nice fish on a popper last Friday evening I am still yet to land one this season. Now this doesn’t phase me too much as some of my best fishing is had in the Autumn and winter months and besides, here at Bluezone we have been working on some big projects so that has kept me more than busy! Continuing this train of thought I’d like to look at last winter as it was here when I first got the bug for night fishing with lures. I’ve now begun trying to think more like a predator and feel this tactic is slowly filtering in to my other angling styles, bagging me some bonus specimens.

These days a big part of my fishing revolves around the use of soft plastic lures and the versatility these offer makes them a great choice for night fishing. Last Winter began very mild and big female bass were schooled up in the local estuaries, you just had to find them at fish for them at the right time. The nights drew in fast and it was a case that to fish the most productive gullies, at peak times, you would have to be fishing in total darkness. Now If I’m honest I never initially planned to night fish with lures it was just a case that in winter it was dark most of the time I wanted to fish!

Now I’m no stranger to night fishing and very much enjoy shore fishing at night with bait. Though what did surprise me is just how productive lures and in particular soft plastics can be at night. At first it’s hard to believe that a fish can see a lure in the dark and until I started catching, I admit that I was skeptical. It’s like anything you do in fishing you can never truly be confident with what your doing until you have landed a fish and this was no exception. 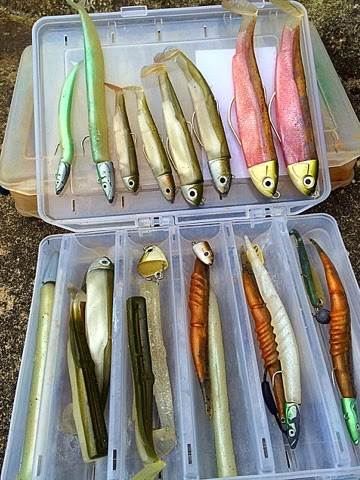 I was having success on the Fiiish Black Minnow and Crazy Eel patterns and having caught a bunch of fish on them both here and in Ireland I was confident they were the way forward. Being so versatile they allowed me to bump them in the tide, slowly twitch them, sink and draw or just straight retrieve them to find what worked best. The slow retrieve is a tactic I’ve been replicating with the Junglegym Be Free Texas Rig and I’ve got to admit it is exciting casting into the abyss knowing it could all kick off any minute!

I remember hitting this chunk last winter just as I was lifting the lure out the water. It was so close that I felt the leader knot come through the tip so it’s important to constantly check your drag (and your knots) so you don’t get caught off guard. And yes, you guessed the lure; I like the disturbance these paddle tails make and by using a slow exaggerated sink and draw I feel I can maximise their potential in the dark when perhaps more disturbance will get you more attention. 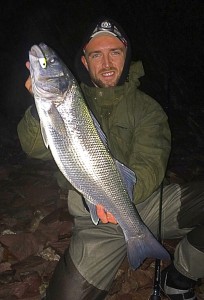 One thing I will say about lure fishing at night is be prepared to lose more gear. Over fairly clean ground that I thought I knew well it’s not uncommon to lose five or six lures a session so it’s important to carry enough to compensate for this. Frustrating as it may be tying on new leaders and leaving expensive tackle in the rocks I can assure you it’s far more frustrating having to cut a productive trip short because you didn’t bring enough! I put this down to the way I fish soft plastics at night as unlike with hard lures that tend to be fished just under the surface, with softs I like to work all of the water column in a slow sink and draw motion. This means you’re fishing deep which lends itself well to finding snags and as I’m also reluctant to use my headlight it can be quite easy to get disoriented and simply cast where you’d otherwise avoid if you could see. 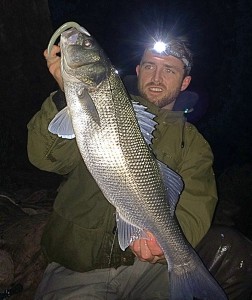 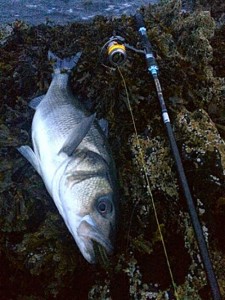 Once a fish is hooked I’ll then use my light to help me safely move around whilst I’m playing it. If I’m changing lures or checking knots I’ll aim towards land as the fish come in so close If you don’t then you will spook them. This one fell to a Sandeel pattern in close to a very snaggy gully and without a decent LED headlight I would of struggled extracting her. You need to see where your braids going so you can keep the fish heading the right direction so I prefer bright yellow braid. I have been using the Sasame Dyneema Samuline in 0.16mm which is around 16lb breaking strain and very thin, though if you’re a bit unsure of the ground then probably wise to carry a spare spool of 0.20 or heavier. What I like about the Dyneema is it’s so bright that it shows up very well under the light of a headlight which is exactly what you want when night fishing and even fishing lures through surf and chop in the day. By seeing exactly where your braid is you can impart the correct movement of the tip to really feel the lure working, just don’t forget to put a nice long Fluorocarbon leader on.

For me the allure of night fishing isn’t just about these wonderful fish it’s also simply the pleasure of experiencing that moment. It’s an eerie and satisfying feeling casting into the unknown and your mind can really run away from you as you anticipate what could happen. Often you don’t see the fish until it’s been landed which just adds to the mystery of it. Even if you don’t catch you can often be greeted by a sight like this as you head back to the car and what a sight those first light big skies can be. 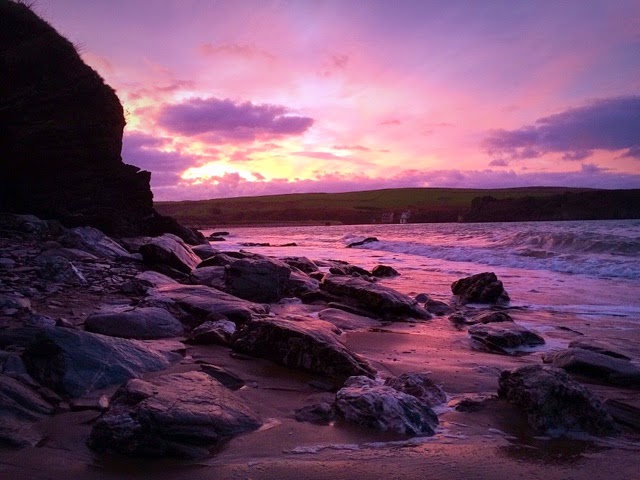