When I first heard this event was being held in Plymouth Sound I must admit I was a tad excited! Competitive Kayak fishing brought to my doorstep, thank you very much! I’ve always believed Plymouth Sound to be a fine venue for this kind of event. The breakwater offers shelter from the wind and the fishing ground itself is so varied it makes it a great prospect for a species hunt, which was the format of the event.

The conditions on the day weren’t too bad though the westerly wind was forecast to increase throughout the day and a glance over the sound saw a notable bit of chop, but it certainly could have been worse. We arrived at Mount Batten at around 8am and with the event due to begin at 10am we were greeted by a fine sight of fully rigged Kayaks along with anglers fumbling into dry suits and arranging their gear ready for the day ahead. Feeling we’d perhaps arrived a bit late we hastily rigged up and began the usual pre launch checks. Did I really need that? would I actually use these lures? just some of the questions I asked myself as more and more gear was loaded into the hull! I had a game plan and it involved covering some distance so keeping the weight down was an issue for me and could make the difference to getting back in time. I find deciding what to take a difficult task as I only really like to take the minimum. This keeps me nimble on the water and it’s also easier to find things. A quick glance over some of the other watercraft however and it appeared some anglers didn’t agree with me! Some of the kayaks were seemingly carrying more electronics and gadgets than the QE2! An awesome sight to behold, some seriously impressive bits of kit were laid on the slipway awaiting the launch and it just highlighted to me the standard of anglers that get involved in these events.

Being sponsors of the event I popped down to have a chat with one of the organisers Jon who the day previous had kindly helped me unload our new Bluezone kayak, in the pouring rain I might add… thanks mate! Jon explained that due to the conditions on the day a new zone had been opened up which allowed anglers to fish up the river, with Laira Bridge forming the boundary. With the safety briefing and birthday sing-alongs out the way the fleet of 80 Kayak Anglers left the slip to the sound of an air horn. This was it, my start of my first Kayak fishing competition and I was loving every minute, the atmosphere had been great, now we just needed some fish! 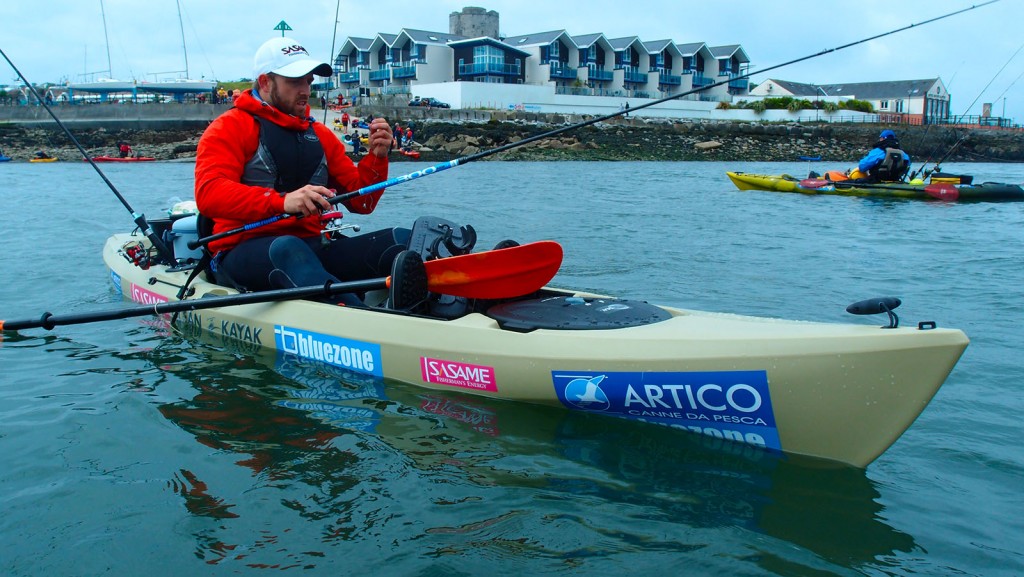 Anglers tore off to their chosen marks and began setting anchors, some close in to Mount Batten pier itself with others choosing to drift adjacent the Eastern shore of zone 1. With the conditions as they were I continued with my plan which was to head straight out to the breakwater and fish my chosen mark near the fort. I knew of a spot here that was sheltered enough from the wind and offered access to mixed ground that I felt held a good chance of several species on my list. I also wanted to beat the crowds and give myself plenty of water to explore without treading on anybody’s toes. After a 40 minute paddle I was soon anchored in tight to the rocks and began tossing my groundbait mix up onto the higher boulders behind me. This is a tactic I’d used here in the past and was taking advantage of the rising tide to slowly release my bait into the water for me. It keeps the chum in tight to the rocks and the aim was to draw in the mid water species – Mullet, Smelt and Garfish while I had a crack at the Rock Species. 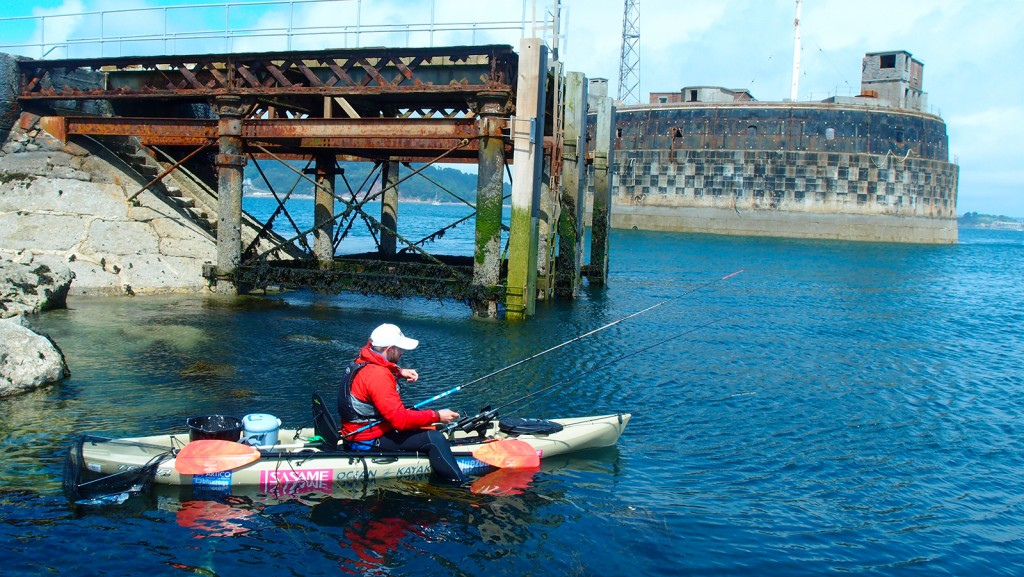 A quick glance around and not another kayak in sight! was this a good thing or bad thing I wasn’t so sure? It had been quite some time since I’d fished this mark and having not fished a kayak competition before I wasn’t really sure how the other anglers went about it. Was it better to stay in close to give yourself more time fishing and a better chance getting in early to register your catch? To me it was just fishing and I knew I could catch a few here and confidence plays a huge part, I’m sure you will agree.

Anyway back to the fishing, it wasn’t long before the LRF rod registered a rattle on the 2 hook scratching rig. I’d baited two size 10 Sasame Keiru Ringed hooks with chopped pieces of Ragworm and soon had a Goldsinny Wrasse on the deck awaiting its photograph. I have to admit to not being much of a species angler and usually focus my attentions on much larger fish; though what struck me is how pretty these little fish really are when you look closely enough. 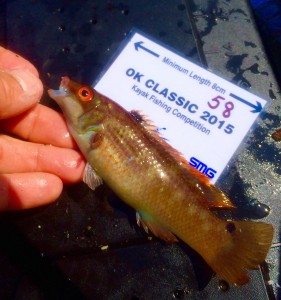 This was even more apparent when the next fish arrived, a beautiful neon coloured Rockcook Wrasse. This was a first for me and what better time than in a species competition for it to arrive. 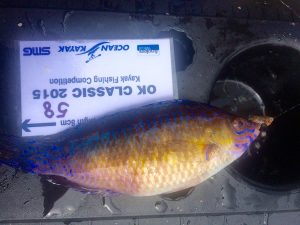 This was shortly followed by an aggressive little Pollock that grabbed my scratch rig on the retrieve, ideal 3 species and only an hour in I was starting to think I’d made a good call with the mark. With a few more wrasse left on the list I continued with the scratch rig and with no signs of any mullet over the bait I switched from the float and bread flake and baited a larger 2 hook rig with worm and Squid cocktails and launched it the 40 yards or so into the cleaner ground in front. The target being Dogfish, Pouting and Poor Cod or anything else that fancied a go. No sooner had I got that rod into position then a flash of silver caught my eye over the baited spot to my left. The water here was crystal clear and I saw a small mullet make its way between the weed beds before darting off. 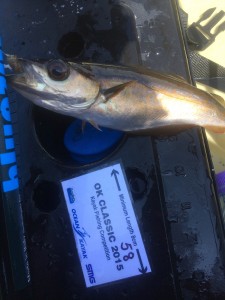 Typical, though sighting only one fish wasn’t enough for me to wind in and set up the float again so I baited the bottom hook on the scratch rig with a small bit of mackerel flesh and plopped that over the baited spot. Not ideal but it would do for now while I decided what I was doing. I have to admit to feeling a bit indecisive a few times on the day and getting into a rhythm was hard when your constantly chopping and changing. This doubt soon shifted when the scratch rod hoofed over with what could only be a mullet attached. I grabbed the rod and immediately loosened the clutch, I certainly wasn’t ready for that as the Goldsinny hadn’t exactly given me the run around! The Mullet gave a few sharp thuds and then came straight to the surface thrashing its head before the hook popped out, it was quite a big one and another species to boot so it was a blow to lose that one. After an hour or so trying for another I was finally rewarded, not with a mullet but another Wrasse, a Corkwing this time so a welcome substitute. This signalled time for a move and I upped anchor in search of deeper water where a Ballan might be lurking.

After a few attempts I finally got the anchor to bite and began fishing the channel between the fort and the breakwater. A sensitive tip was inserted into the Bluezone Telepower 360 and again rag and squid was loaded onto a 1 up one down rig. After an hour or so of nothing and now feeling the full brunt of the ever strengthening wind I began clock watching. Should I head in and attempt some mini species along the harbour wall, or stick it out? Fortunately for me the thumping rod tip made up my mind for me and after a rather nice scrap a beautiful Ballan was on the hatch ready for its picture. 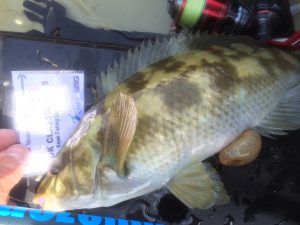 Not sure if anyone else had the same trouble as me but I certainly learned my lesson when it comes to my kayak photography skills. Wet hands and touch screen Iphones do not mix! The amount of time I wasted just trying to unlock my bloody screen was ridiculous but somehow I managed to get all the pics I needed, though not exactly inspiring I think a GoPro is on the shopping list.

Now with 4 Wrasse species and a Pollock it was time for a move. It was approaching 14:00 and with the comp finishing in two hours and a good half hour paddle back, I decided to try a drift on the way in to cover a bit more ground. Fortunately the drift was taking me in the right direction so I made good use of it to hook my 6th species, a tiny little Whiting. 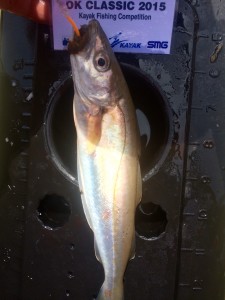 Now it was definitely time to head back and with wind and tide behind me I anticipated a nice easy ride…Wrong! The swell and chop appeared to hit me from all angles and the paddle back was miserable in all fairness and I took a bit of a battering, costing me a good quarter hour. Back in sight of Mount Batten Pier I could see several anglers were still going so with an hour of the comp left I decided to have a go inside the wall in an attempt to bag the 7th species, since when have Pouting been so elusive!? The conditions here were quite awful and the wind made the drift much too fast and I even managed to break my anchor reel trying to drop anchor in tight so decided to head in and register my catch and hope it was enough. It was only 15:20 and I was surprised to see so many people already back before me, had I missed a trick? In the event of a tie then the first angler to register his catch will take the position so it suddenly dawned that maybe I’d pushed my luck, conditions were pretty bad and 6 species might not be too bad after all.

After the event everyone gathered around the registration area for the results. Rumours were going round that someone had landed 14 species so I loaded the van a bit deflated and cursing myself for losing that Mullet.To my surprise I scooped 7th place with Mark Crame landing an impressive 9 species to take the win! It was a tough day on the water but thoroughly enjoyed and for the debut of the Bluezone Kayak I was made up with placing..

Here’s the scores on the doors.

And let’s not forget that the event was in aid of Heroes on the Water with Scott Ward winning that category.

Species hunting isn’t a style of fishing I’m used to but it opened my eyes to a new angling challenge that actually gets you thinking much more than traditional match fishing. You need to fish multiple styles, methods and marks to rack up the points which means planning your time on the water around the tides and weather conditions. You also have the added tactic of knowing when to come in and register your catch and interestingly enough the two gents in 6th and 5th, Ian and Keith -also had 6 species but obviously knew when to call it a day!! 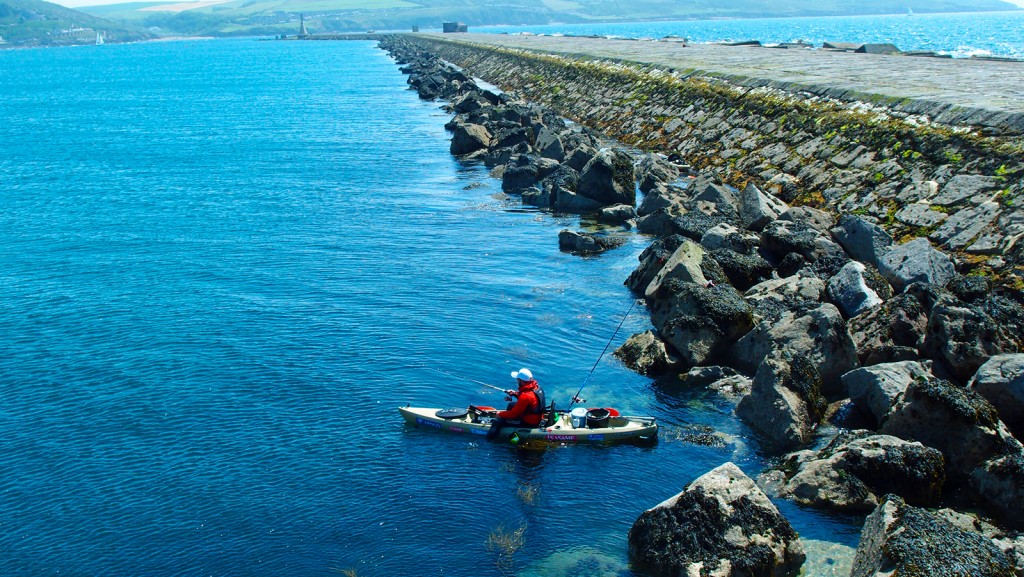 All in all an awesome event with 19 species landed including the awesome looking Red Band fish. For those of you I had the pleasure of chatting with it was lovely to meet you. Thanks to Ocean Kayak and Heroes on the Water for allowing us to be sponsors of the event, we’re always keen to get involved in such a great cause. Bring on the next one!