Well what a start to the winter season we have seen this year. Weather wise I can’t quite remember ever being faced with such a prolonged spell of bad conditions. Storm after storm appear to be hitting us and as I write this I’m again housebound as we’re in the midst of yet another one. The Met forecast rarely seems to show winds below 30 or 40mph and to say it’s been frustrating would be an understatement. That being said if you are prepared to get out among the stormy conditions it can offer some of the finest sea fishing you’ll get here in the UK.

High winds, big tides and fast currents are like a dinner gong for our Cod and Bass. It brings them closer to shore among the stirred up conditions in search of easy pickings and should generally be welcomed by us anglers. Yes, it’s not particularly comfortable and on occasions outright ridiculous but for me the potential rewards are far too much to resist.

The target venue for my winter campaign has like the past few seasons been the River Tamar in Plymouth. The Tamar is notorious for producing a few massive fish each winter and there is a small group of hardcore local anglers who know this. This year I have given up the increasingly combat style shore fishing in search of solitude and have been targeting a specific area only accessible by boat or kayak. Having the latter option available to me has been a huge bonus to my catch rate but has presented its own challenges with the weather we’ve been getting. Through trial and error I have learned to become quite strict in terms of the conditions I’m prepared to go out in.

As a general rule of thumb I try not go out in tides greater than 5.3m or wind gusts above 35mph as these create the most unpleasant conditions when night fishing in the river and have been the cause of some of my hairiest sessions when I have pushed my luck that bit too far! With safety in mind it’s important to plan your session very carefully prior to a night launch and you want to aim to be at anchor wind with tide. A big South Westerly combined with a flooding tide will generally mean the wind and tide is on my back at my chosen mark which is the safest and most comfortable when anchored or tied off at the rear of the boat in lumpy conditions.

My first few serious sessions began mid November when Cod catch reports began coming in. Weather conditions really were quite bad at the time but the urge to get out meant I was keeping a close eye on the forecast and waiting for the small lulls between weather systems. By being ready to take advantage of small weather windows and fishing short 2-3 hour sessions during peak tide times I was soon able to bag my first cod of the season, a fish of 7lb.

It was actually during this session that I lost 3 big fish in a row before finally landing what felt like the smallest of the night. Tied off to a buoy in around 15 foot of water in a fast ebbing spring tide I hooked and lost three fish on the same rod within the space of an hour. The first fish pulled the hook and the following two snapped my 30lb leader, none of which I ever saw. It was at this point when I knew there were some serious fish passing through the area and I began beefing up all the gear I was using. Up to that point I had been using 5/0 Pennel rigs with 30lb leaders to present my whole squid baits, which had always been ample enough for me. I soon made the switch to 8/0 Kamikaze hooks and 70lb leaders in a bid to prevent any more losses.

After a promising start I then went on to blank for over a week, fishing every evening after work on the fall of a nice spring tide cycle. I just wanted to be in position with the big baits for when the fish moved back in and I began taking more risks with the weather and going out in some really awful conditions. It was at this point when I took a step back and set some rules for myself, including the 5.3 rule! Tides above this become unmanageable and seem to drag a whole manner of crap down the river with them; seaweed, logs, whole trees! Getting caught up in the tide with any of that at night isn’t fun I can assure you!

At this point I was becoming somewhat addicted to the cause and coincidentally the night after my trio of dropped fish – a monstrous Cod of over 22lb was landed from the river by a friend of mine, Frankie. This fish sent my head spinning! As now I had visual proof of the size of the fish making their way up the river and though I was over the moon for Frankie it didn’t half get me thinking about my own fishing…that was the caliber of fish I was up against! Did that snap me up on 30lb line? I’ve landed Cod over 24lb off wrecks on similar strained gear…was it bigger? All horrible thoughts when the weathers preventing you from even getting out the house!

Re-focused and now buzzing with confidence I carried on pursuing my area with my now seriously beefed up gear. The new game plan was to fish big and adopt the one bite strategy to target solely the largest. I was using double or even triple dirty Squid and Razorfish baits on 8/0 pennels in an attempt to ween off the attention of smaller Cod and Ray. 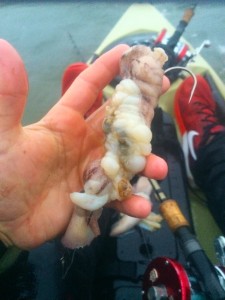 I now had no interest in Codling or big bags of fish like I had in previous seasons. One bite and one fish was all I wanted. I’d lob these monstrous baits into my gully and there they’d sit for up to an hour at a time before being checked and replaced. Several blank sessions and I was starting to question the decision until I finally got the bite I’d been waiting for. I was fishing the flood and had a strong South West wind on my back when I had two unmistakably large thumps on my right hand rod. That wasn’t the wind! After picking it up I was met with another big thud before the grippers pulled and it all went slack…Fish on! I wound down and into the fish, no need to strike here she was already hooked.

The initial run from this fish was so powerful I knew immediately I’d hooked something big and as it moved down tide, staying deep, I had flashbacks of lost fish and an image of a monstrous Cod in my mind. This thought was soon muddled as the runs felt too fast and there was a distinct lack of any head thumping. This was definitely a Bass and a big one! Several scarily fast runs later and the fish surfaced down tide thrashing its head, about 20 yards from the kayak. It was just getting dark but there was enough light to make out the unmistakable dark Silver flash of a very large angry Bass. As with most big Bass they tend to stay up near the surface and this one was no exception. It would come up and thrash its head before turning and using the fast current to create more distance between us. As the fish was moving further and further down tide and now dangerously close to the other mooring buoys, I was starting to doubt whether I’d be able to pull it back up on the 100g lure rod it was attached to. I began to consider untying and drifting down tide after it whilst at the same time fumbling behind me trying to untangle my net that had seemingly wrapped itself around every conceivable object it could!

Strangely enough shortly after this it turned and began heading back up tide towards me and I was so shocked I almost lost contact with it trying to take up the slack! Finally though the fish surfaced by the boat and with the flooding tide in full swing it was a very hairy maneuver to get her in the net, but in she went. I paddled the 80 yards or so to shore and measured her at 85cm and at 13lb 2oz the Bass was the fish I had been chasing for the past 4 years. A journey that has taken me to Ireland’s Copper Coast five times and an almost uncountable amount of UK lure and bait sessions I finally had a big double on the bank that I’d landed only 5 minutes from where I live! 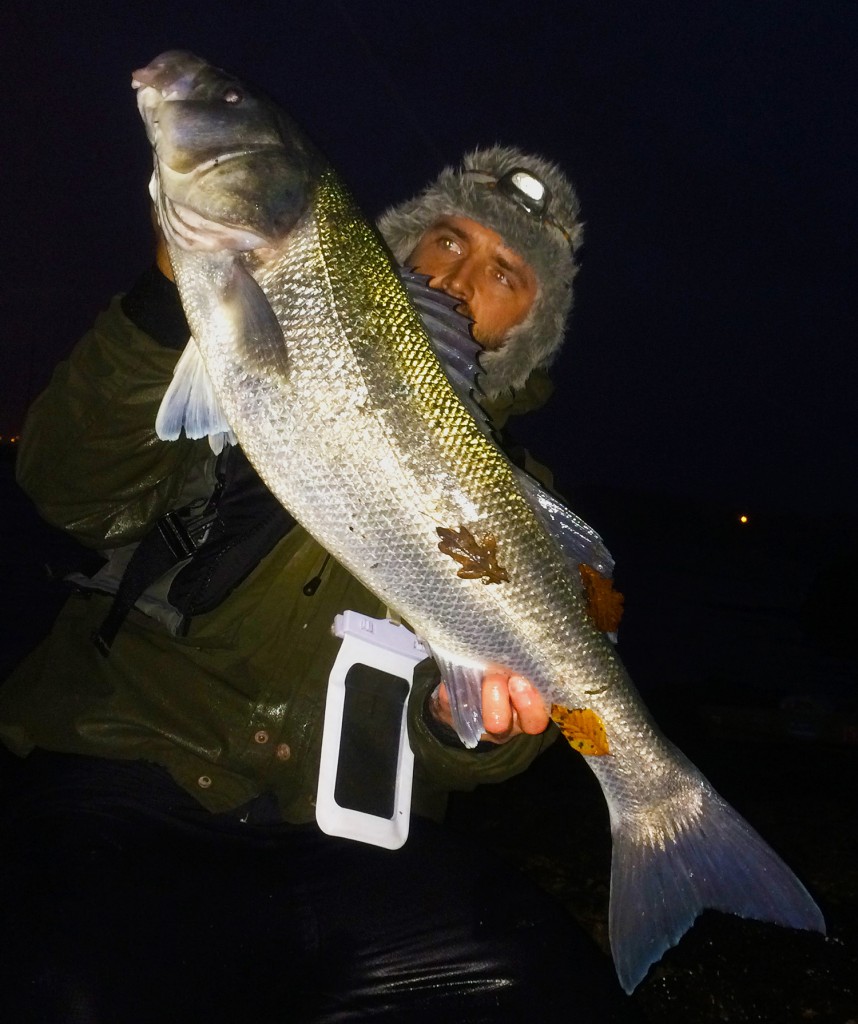 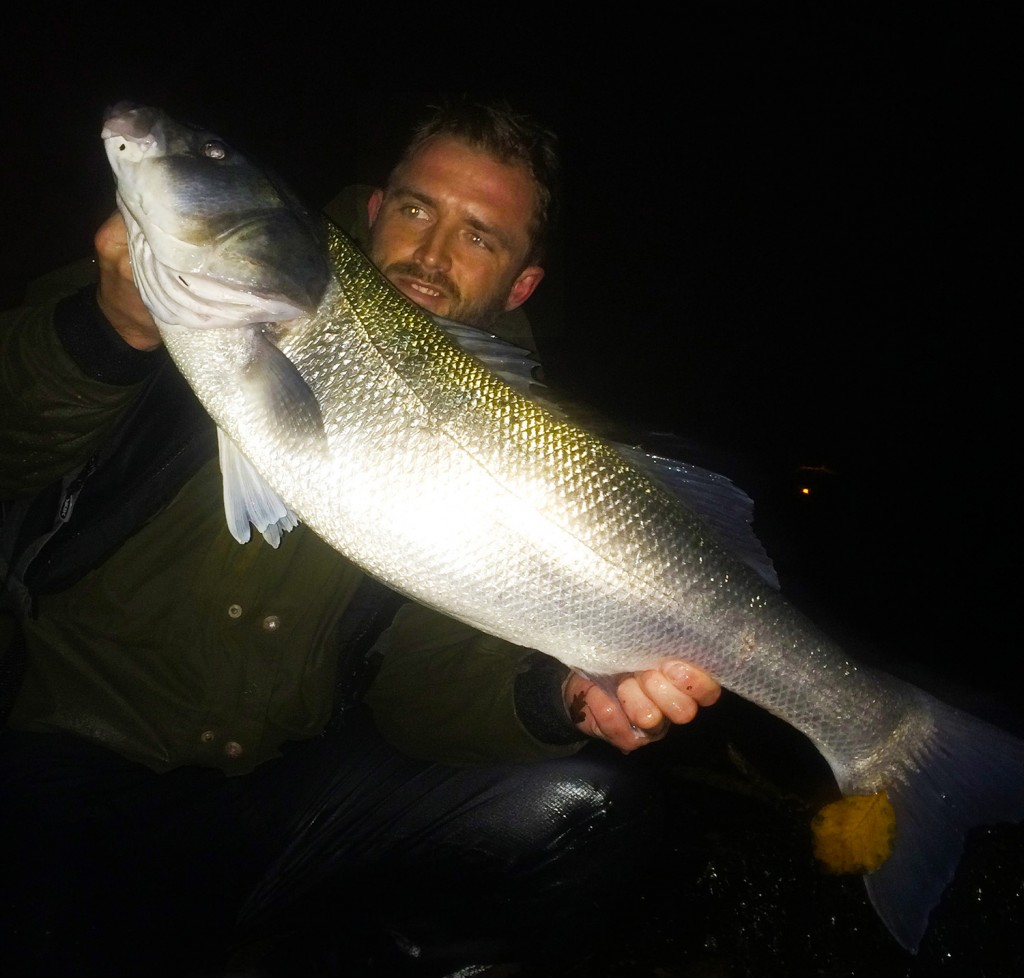 The River Tamar can be a very special place this time of year. The size of the fish in its system is seriously impressive though at times fishing for them can be absolutely soul destroying. Staring at motionless rods while getting battered by the elements isn’t everyone’s cup of tea but for me it’s why I go fishing… you only need one bite!