Sasame are well known for producing an excellent range of hooks and terminal tackle so I was more than a tad excited to see what their new LRF range was like when it arrived in the warehouse. On first impressions the gear stood out as something a bit special and the Light Game range includes two new lure rods – The F-S01 Curiomax and the F-S02 Voltina. Both made from high grade carbon complete with Fuji Alconite guides they are designed for use with one of Sasame’s 4 new spinning reels, the F-R01 Metalica, F-R02 Musashi, F-R03 Voltina and the F-R05 BlackJack Baitcaster which vary in price to suit budgets and requirements with the aesthetic Red Metalica XR topping the range.

The 7-20g Curiomax Light Game coupled with the Metalica XR Red 3000 spinning reel makes a stunning little LRF set up and I put this through its paces over the weekend in some challenging conditions! 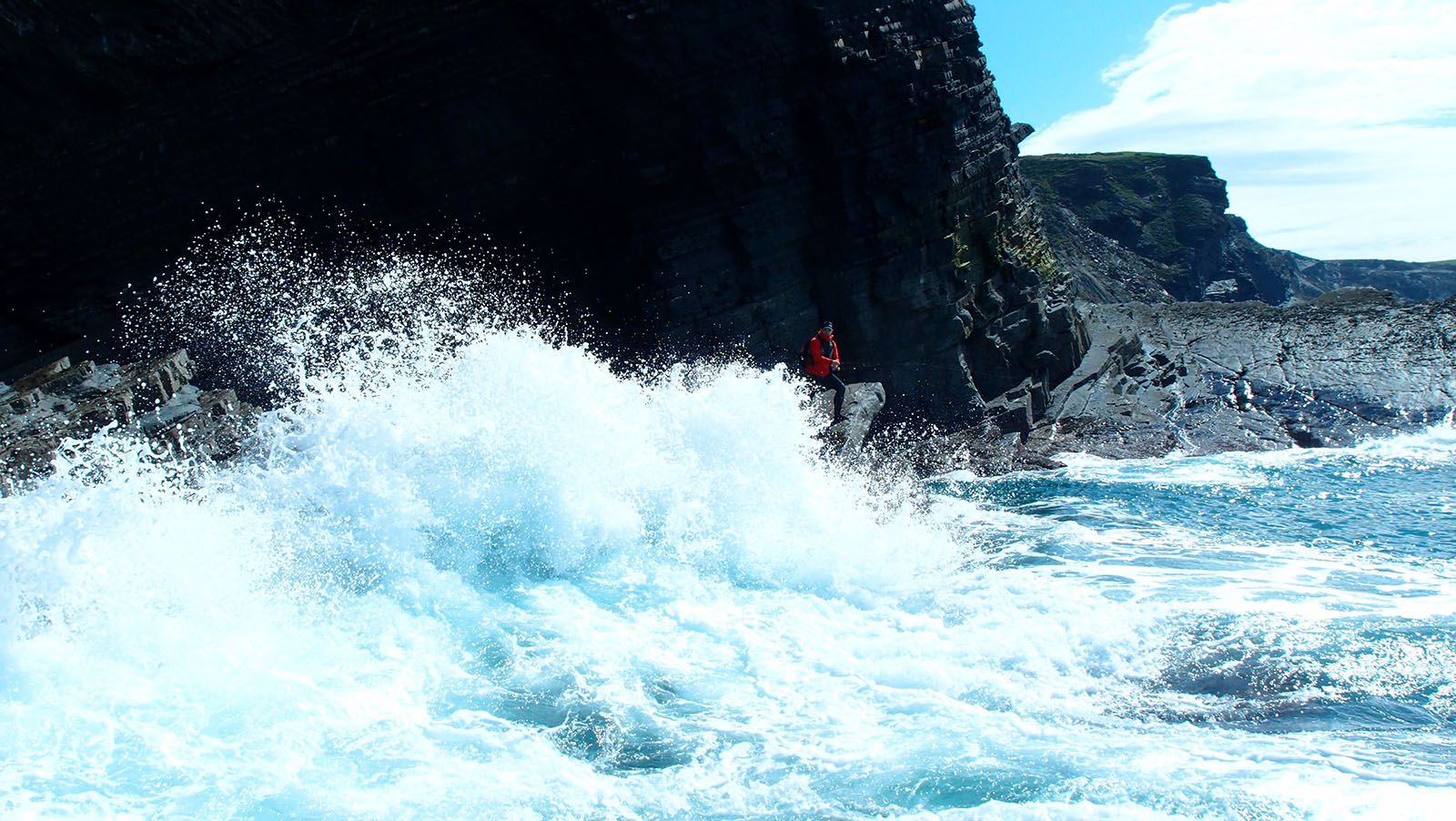 With a bitterly easterly wind stirring up some big seas I sought what cover I could on the North Cornish Coast and fished both off the rocks and off my Kayak. At just over 6ft in length the Curiomax is a foot or so shorter than I’m used to for shore fishing and you won’t be casting to the horizon with it. However coupled with the Metalica XR and 0.16mm diameter Sasame Dyneema braid I was having no trouble punching a plastic a good 60-70yds. I used a variety of lures throughout the day, including a 25g Black Minnnow which it handled but would be about the limit of the casting weight. The optimum weight I found to be around 10-15g which is the majority of small soft plastic lures when fished with sinkers or dropshot. 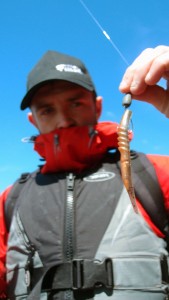 In true LRF terms this rod is on the heavier side with a casting weight of 7-20g but from my experience this is well suited for the types of lures needed to catch Wrasse, Pollock and other rock species. It also means you have a bit more grunt in reserve to extract them without sacrificing sensitivity in the tip. 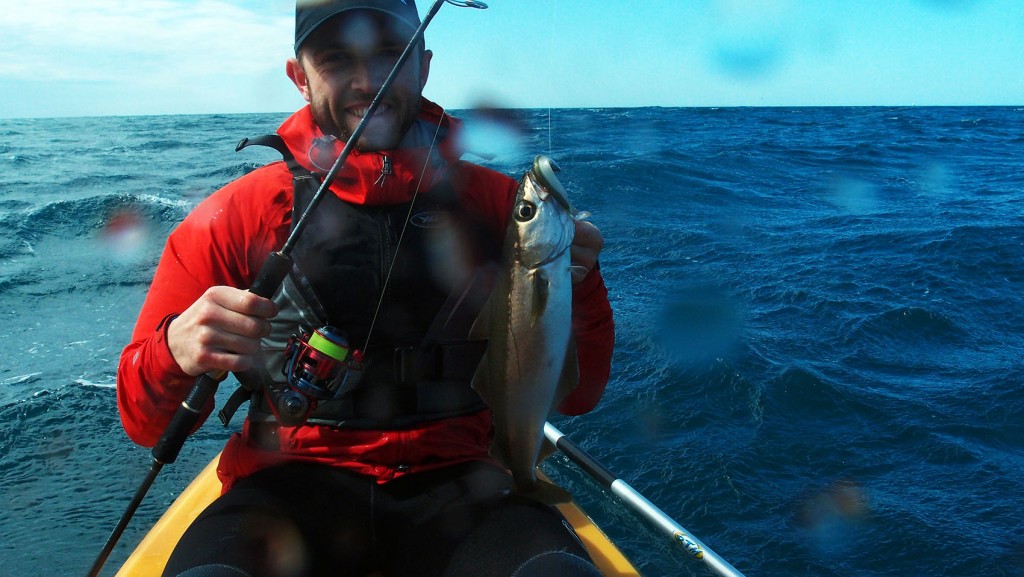 The Curiomax blank is very thin and available in 3 weights, 5-20g, 7-20g and 8-30g all at 6ft in length. I found the 7-20g to be a good compromise for both LRF and Kayak fishing though in hindsight the 8-30g may have been better suited for the heavier lures I was using on the Kayak. That said, I found the rod came into its own when vertical jigging with plastics and small jigs and being so light the small Pollock and Wrasse that I was catching made a great account for themselves. I also liked the extended butt and one piece design of this rod and found the through action curve you get when playing fish so much fun!

The Metalica XR is a real credit to Sasame and features some impressive stats to match its awesome looks. Sasame have machined everywhere they can with this reel in order to reduce its mass and the sleek design of the aluminium Spool, Handle and bail arm mechanism have helped reduce the weight to only 252g. Now that’s very light considering the reel has a Stainless Steel main shaft and it needed to be light in order to be paired with the Curiomax. 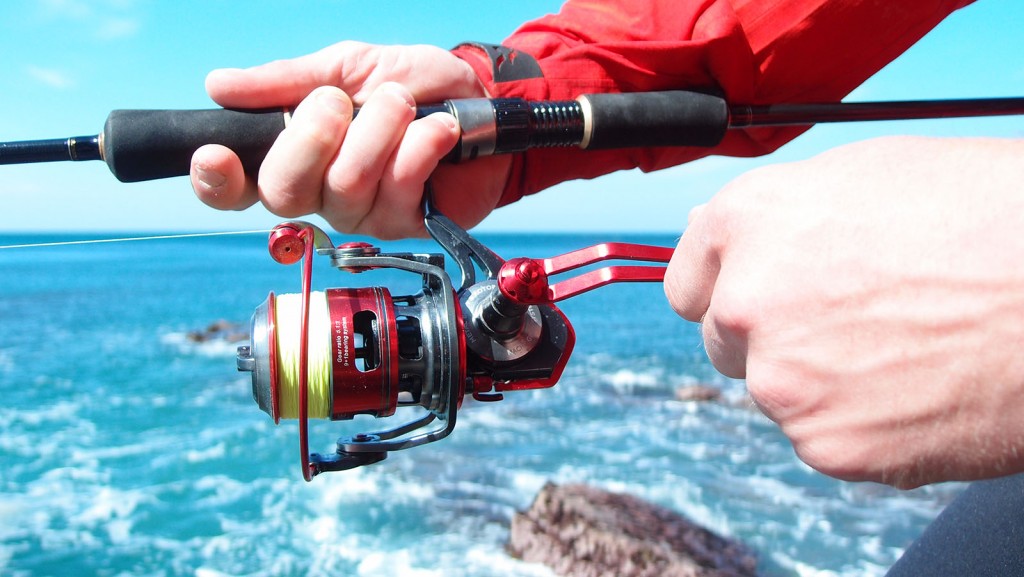 The Metalica XR has 10 bearings and a super smooth drag system and is a very capable reel in the right hands. I used the 3000 size which suited the rod well though for an even lighter feel you could drop to the 2000. Along with Sasame’s hooks these reels are built in Japan and are set to make a big impact into the UK lure fishing scene. 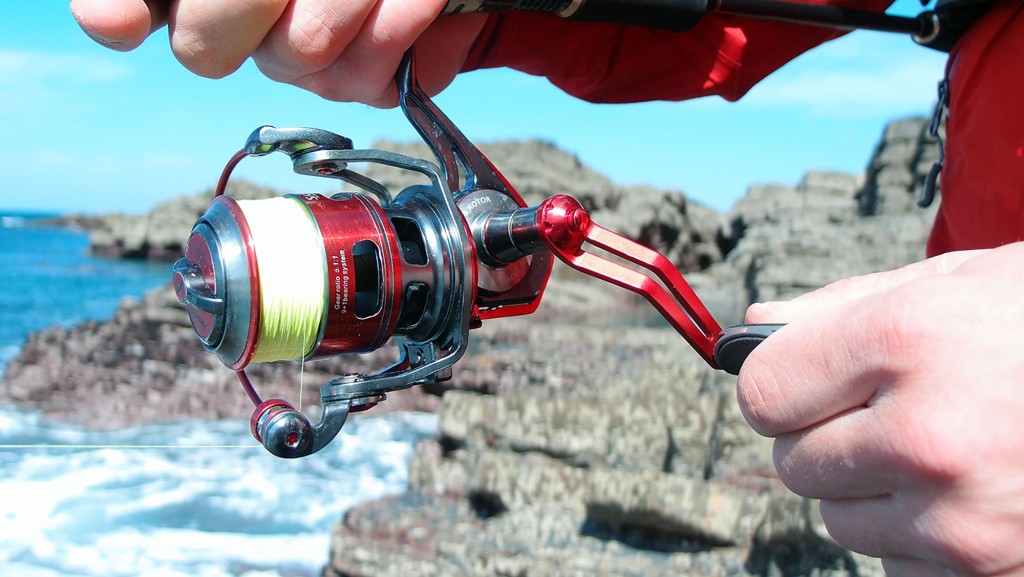 One name pops up again and again here at Bluezone HQ and that’s Jim Whippy! This man has enjoyed some awesome fishing of late including this Cod of 20lb that he landed last week on board Deep Blue Charter from Eastbourne. 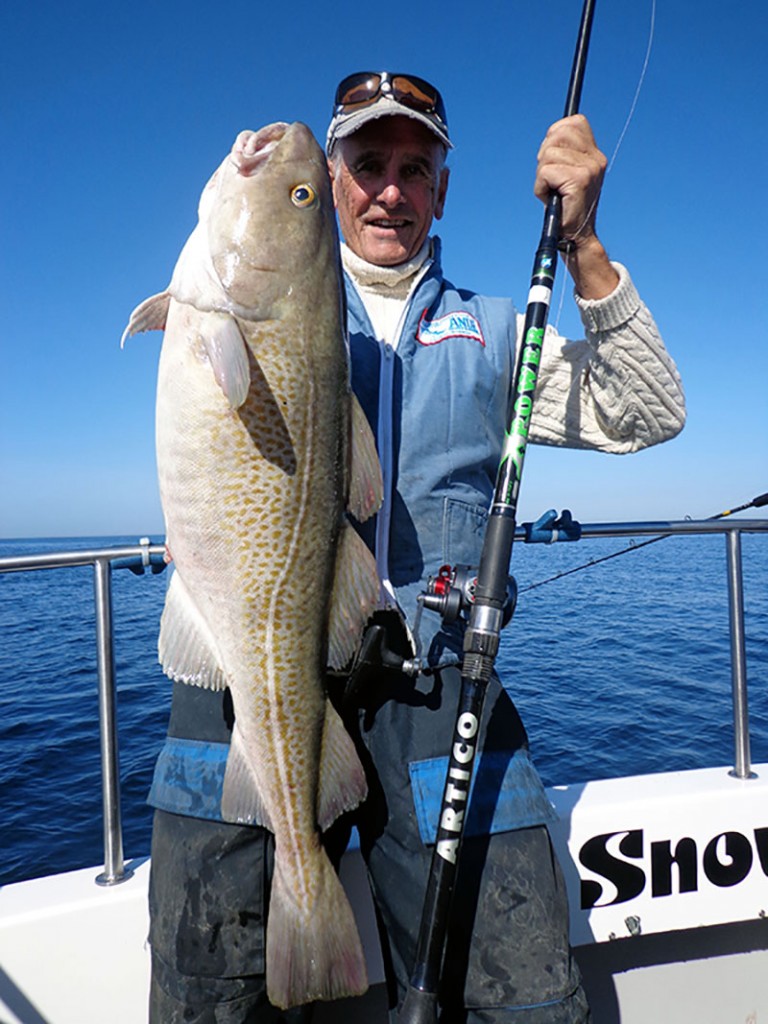 This was the best of over 140 Cod landed that day between him and 6 other anglers! Impressive stuff and certainly credit to skipper Steve who has made quite a name for himself when it comes to putting anglers on the fish. Steve is known for pushing it to the limit to find the bigger fish and that often means travelling very far offshore among the mid channel wrecks. I was shocked to hear that this catch of 140 Cod was actually half the catch they landed the day before, with Steve’s average being over 100 fish based over 35 trips!

Jim landed 16 Cod that day and bagged biggest fish with his 20lbr. He’s been using the Artico X power for a couple of seasons now and says its’s so versatile he uses it for all of his fishing. Here’s what he had to say

It’s a great rod with a very sensitive tip – you can feel minute little Gobies nibbling away yet still have all the power through the butt you need to haul up these big Cod, I even used this same rod to land a 4lb 2oz Black Bream that bagged me EFSA fish of the year last year! 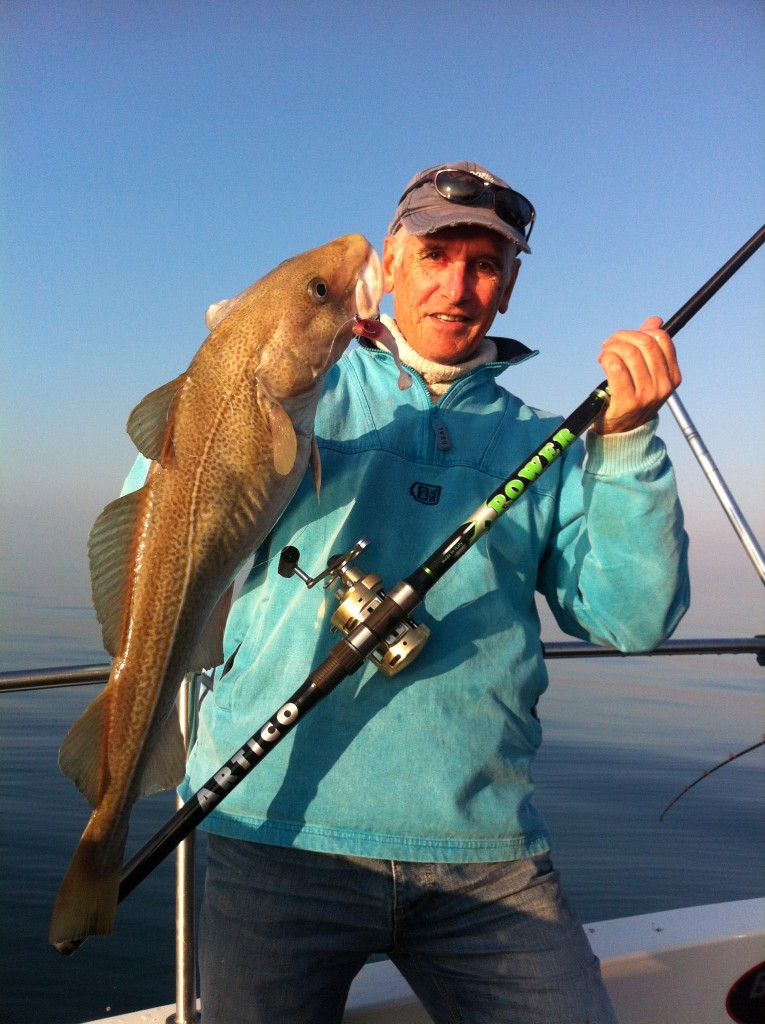 Jim with another cracking Cod in what looks like mill pond conditions!

Jim hooked the biggie at slack water and as others around him were struggling on Sidewinder shads he decided to switch to a Pink Fluro Twin Tail, fished tight to the bottom. Top angling by Mr Whippy and we look forward to his next catch report once these awful Easterlies have died down! 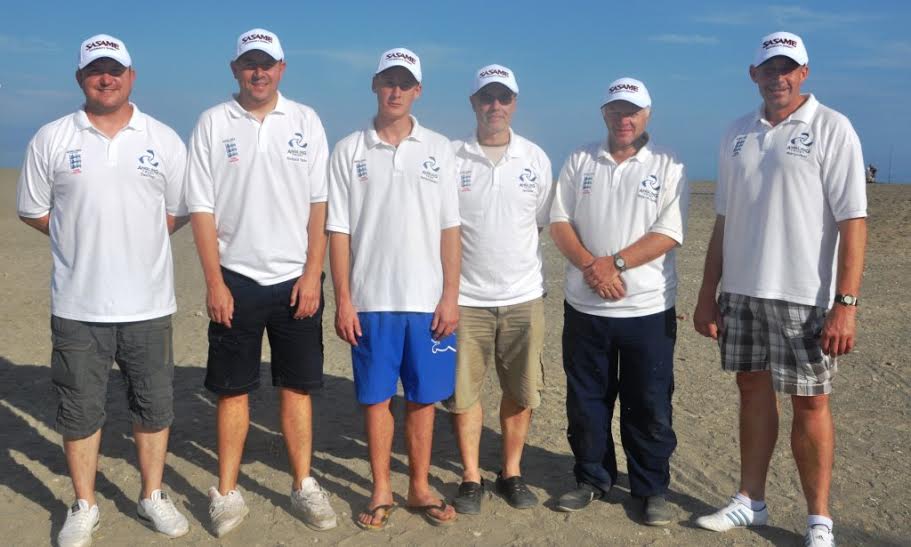 I touched base with the England Shore fishing manager Martyn Reid to look to get an insight into some of the tactics and terminal tackle the boys used to clinch Bronze at the event held in Torremolinos. Martyn and the team are busy preparing for this years event in Portugal but he was kind enough to share his story and delve into all things fishy!

If like me, you don’t get the chance to fish Mediterranean seas very often then you might be wondering what type of fish were the boys were targeting during the World Championships and here’s what Martyn had to say:

“The fish that were caught during the Championships where Mormyrus (Striped Bream) , Bogue, Scad, Spotty Bass, Weaver, Sole & various other Pretty Mediterranean Bream”

So a large range of species to go at it would appear and this is the bit that really interests us at Bluezone. We specialise in all things riggy so were keen to hear the types of rigs used to target so many species. Martyn explained that:

“Rigs were two hooks above the lead and one below with snood lengths made of a metre of 0.16 diameter Sasame Fluorocarbon”. “Trace diameter was 0.47 with size 20 swivels trapped with stop-knots or glued tubing with 120gm leads used for maximum distance and less lead for shorter range” “Hook sizes for the Mediterranean were 5mm across the gape minimum size and this was checked every night by the officials. Our hook of choice was the Sasame wormer”

It sounds like the Anglers kept things pretty neat and tight in terms of rigs and we were pleased to hear our Sasame hooks and fluorocarbon were doing the business. Martyn explained that long range was imperative and some of the team were using line diameter as low as 0.12 with braided leaders, that’s just 8lb! It seems a world away from UK sea angling but obviously key to gaining the extra distance required to bag the prize and I think we could certainly learn a few tricks from these boys!

“The bait used was Special Catalana Worms, a very long thin Rag Worm which could only be transferred to the hook by a baiting needle. Various pop up beads, luminescent and natural were also added to attract fish to the bait and because all the competitions where fished at night an ultra violet torch was used to charge Luminous coated leads”

So there you have it, some pretty cool stuff there from Martyn and the England shore team and I’m sure you will agree that some of the extra touches these guys are using certainly offer them the edge. We’d like to wish Martyn and the team the best of luck this November in Portugal and here at Bluezone we will continue to support the team with the terminal tackle needed to bring back the goods